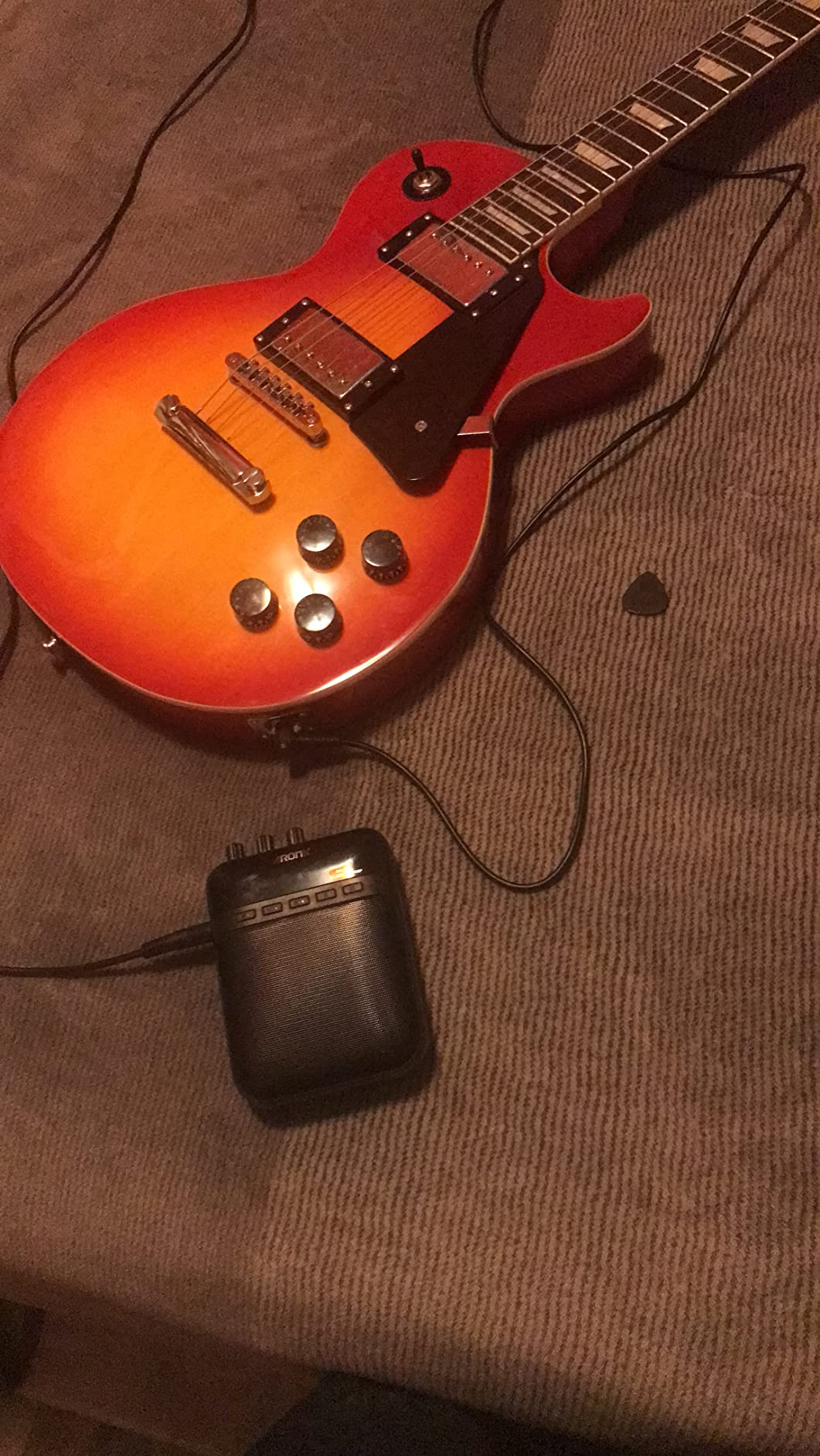 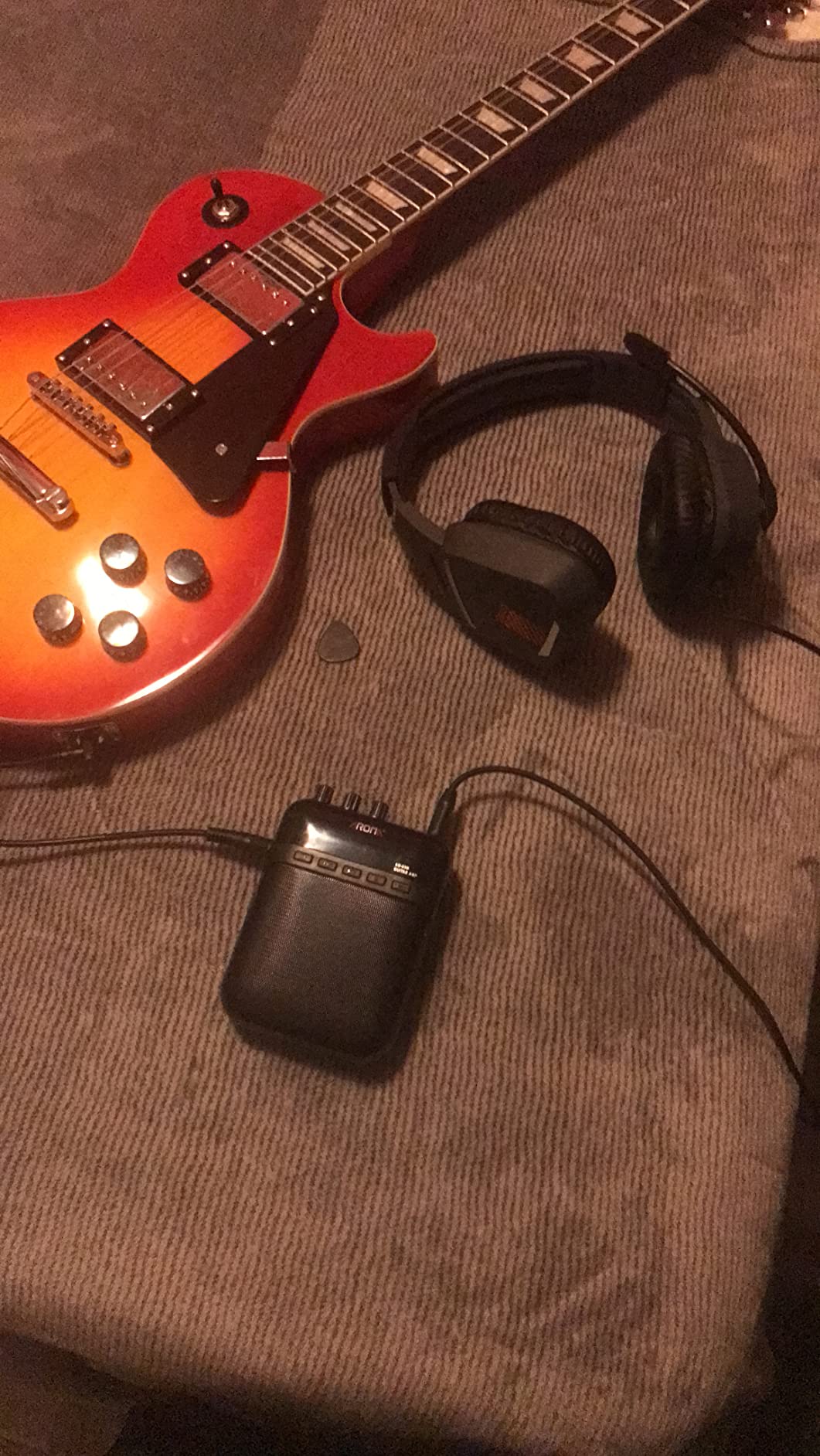 Guitarpunk
5.0 de 5 estrellas Definitely worth it!!
Reseñado en los Estados Unidos el 9 de noviembre de 2020
Compra verificada
No se pudo cargar el contenido.
This thing is so worth it! With this mini guitar amp i can practice guitar outside without worrying about power cords and stuffs. The built-in battery is quite amazing too! I haven't had to charge it since opening the box about a month ago! I didn't know that it has recording/playback functionality when i purchased it, which is really fun for like layering riffs. The sound quality is decent enough to practice with (distortion and clean) and gets surprisingly loud for it's size. So far I have no complaints. I even ended up buying a second mini amp!
Leer más

Guitarpunk
5.0 de 5 estrellas Definitely worth it!!
Reseñado en los Estados Unidos el 9 de noviembre de 2020
This thing is so worth it! With this mini guitar amp i can practice guitar outside without worrying about power cords and stuffs. The built-in battery is quite amazing too! I haven't had to charge it since opening the box about a month ago! I didn't know that it has recording/playback functionality when i purchased it, which is really fun for like layering riffs. The sound quality is decent enough to practice with (distortion and clean) and gets surprisingly loud for it's size. So far I have no complaints. I even ended up buying a second mini amp!
Imágenes en esta reseña

Crazylabrat
5.0 de 5 estrellas This little guy goes to 11!
Reseñado en los Estados Unidos el 13 de marzo de 2017
Compra verificada
Got this for my hubby because he has a half dozen guitars, a banjo, violin, and a ukulele. The man is an instrument hoarder, but I love him anyway. He wasn't necessarily looking for a mini portable 5W guitar amp, but when you need ideas for gifts for a musician, and you're not one yourself, you keep your eyes and ears open when he speaks anything about his music stuff. It came about when he was playing his travel guitar on the beach in Mexico, and he had it plugged into a small Bluetooth speaker. Well, our crew was pretty snookered, since the 6 of us where at an all inclusive place, and we all wanted to sing with him. Problem was, the small speaker just couldn't make it over all of our drunken voices. He made a comment that a mini amp would probably be better. So I took that little bit of complaining and got him this one. When it came, he didn't seem to too enthused about it, so I broke open the box and plugged it in to charge. That got his attention. "It doesn't need batteries?" he said. No sir, it does not. He appreciated that, and how flippin' light it is.

What he really liked about this particular amp, is that the clip can be turned around and it then becomes a stand. So if you don't have anything to the clip it too, or you want to put it out facing your crowd, then you can do either. Then, this thing packs a punch in the volume department. We both couldn't believe how loud it could get. When I commented "Wow, that sure is loud", he said I can still turn it up! We joked that this little portable amp can go all the way to 11!

Next, he loved the inputs & outputs of the amp. Headphone jack, mic jack, & a guitar jack. He said it would be cool if it had a bluetooth function too, so he could turn it into a speaker for his phone to play music. That's pretty much the only negative thing he could say about it. I guess this was a winner of a surprise gifting for me.

ZimmerKing
2.0 de 5 estrellas Rock Guitarist? You'll Love It ... BUT ...
Reseñado en los Estados Unidos el 4 de diciembre de 2019
Compra verificada
After years of playing nylon and steel stringed Taylor guitars, I was looking for a small amp that could occasionally be used with them, but mostly for my little Traveler guitar (purchased here on Amazon) that accompanies me on out of town trips. It's the right size and a good value for the money. BUT, sadly, it is not usable for folk, Spanish or classical music. My instructor (a professional musician) advises that it has an overdriven front side preamp in the circuit to intentionally deliver the distorted sound that is heard in Rock music. We tried plugging in larger speakers to no avail. And for me, back to the damn headphones and ear buds. Too bad.
Leer más
A 19 personas les resultó útil
Informar de un abuso
Traducir opinión al idioma Español

Very flexible in both inputs and outputs. Sound is good for its size and
works well with both magnetic and piezo ("accoustical") guitar pickups.
Combo Belt Clip & Stand is very handy. Good as a unique and appreciated
gift for guitarsts for both practice and mobil sound enhancement of
solid body and acoustic guitars with a piezo (under saddle) pickup.
Standard guitar cable (1/4" jacks) is used for for connecting guitar to amp.

NOTE: To access Recording & Playback functions, a Micro-SD card (not included)
has to be inserted into the apropriate port provided on the AG-03M.

When a Micro-SD card is inserted, AG-03M is capable of both:
Playing pre-recorded .mp3 tunes thru headphones or amp speaker.
Recording an .mp3 from one or more of its three audio inputs.

When inserted into an adaptor and then directly and into my laptop port,
the Micro-SD card reads as "HDSC (F:)" on Windows File Explorer ("WFE").

Using WFE, I created a directory "MP3" in the root of HDSC and
copied a dozen .mp3 music files into it. The Aroma Amp found and
played all of them OK and with good sound. The tone knob has no effect
on .mp3 playback but the EQ Button (#11 in the instr) changes the audio
response noticeably with each of the five EQ profiles provided.

Playback of .mp3 audio files is via the AG-03M internal speaker or earbuds
(not included). Listening with earbuds provides a satisfying bass response
and the five EQ modes quickly contour the audio for different types of music.

A 30" USB cable is supplied with AG-03M. When cable is inserted into
both my Dell Laptop and the AG-03M (with Micro-SD inserted into it), the
latter's Display lights up in "PC" mode and WFE reads the chip as "(F:)"

The .mp3 files stored stored in MP3\ are shown and can be played in PC mode
(or renamed, deleted, etc.) by WFE in the usual manner.

Said Instructions say that recording(s?) are made in an "AMP file"
(folder? sub-directory?) as "rec0000.mp3". However, before this could
happen I had to manually create an AMP folder in the root of the Micro-SD
chip. Afterwards, the AG-03M called the first recorded file "rec00000.mp3"

Subsequent recordings are named rec00001.mp3, rec00002.mp3 and so on.
Using WFE, one can rename each recording as desired to make recall friendlier.
They can be moved or copied into MP3\ directory for automatic replay.

To record, plug in your guitar and push the M button repeatedly until REC shows
in the left of the display. To actually start the "tape" rolling, press the >||
(leftmost, #1) Button for about a second and release it. The display begins
to show the time for the recording. Do the same thing to stop the recording.