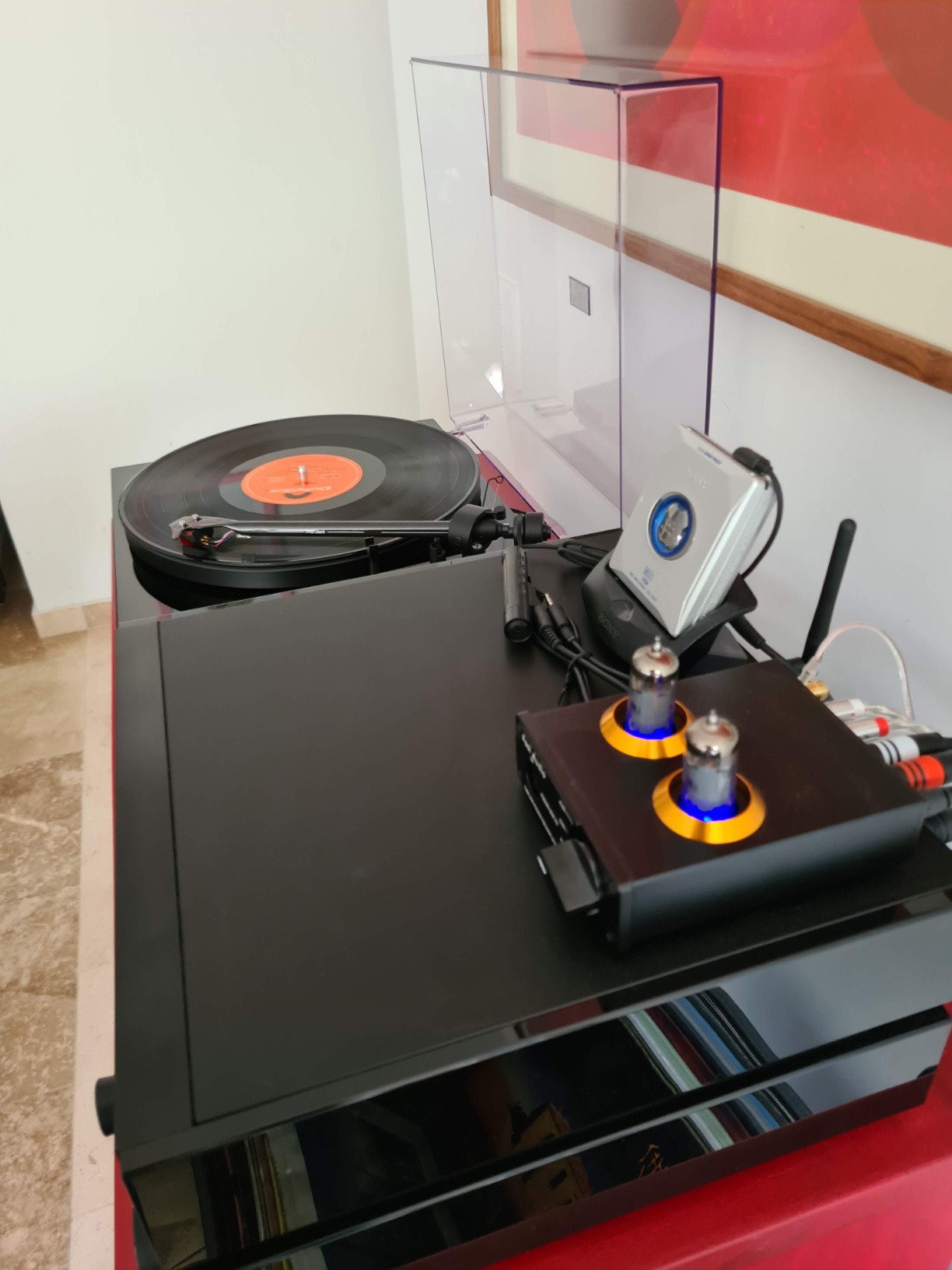 JuliusF
4.0 de 5 estrellas Very good for the money... with caveats...
Revisado en el Reino Unido el 31 de agosto de 2021
Compra verificada
I have a decent Cambridge audio integrated amplifier with a built-in phono stage, and I bought this item as much out of curiosity as anything else to see what would happen if I inserted a phono preamp in the line. The results are pleasing on the whole, there is definitely an increase in fullness of the sound at the bottom end, particularly noticeable when listening at quieter volumes, perhaps getting more towards that vinyl Nirvana of 'warmth' that people like to wax lyrical about, and there certainly is an overall noticeable difference.

I understand this may be further enhanced by fiddling around with different valve sets as well. In this latter regard, I did at the same time purchase the ( allegedly) upgraded valves for an extra £15, but I was disappointed when I received these, as despite what it says on the Amazon website, these were not USA manufactured, made in China writ large on the box(!), so I returned these with a frustrated sense of misrepresentation, unusual for Amazon on the whole.

In terms of downsides, I do think that the increased fullness and warmth have come in terms of sacrificing some detail/ clarity at the top end, although as mentioned above the overall sound is still pleasing. I think it's probably very much a matter of personal taste; if you are used to digital music you will notice, more of a rounding off of the overall sound, but in some scenarios this could be handy to reign in excessively harsh treble. Horses for courses really.

On the whole I'm pleased with my purchase and expect I will be keeping this item.

UPDATE: I acquired another set of valves, Siemens NOS, from eBay, and these immediately lifted the sound further, the bottom end retained its clunk but sharpened up, and a lot more top end detail was revealed. So it does seem that whilst the base package is overall good value an extra £15-20 on better valves is money well spent, with European or American valves seeming to he the way to go.

Ottawa_M
5.0 de 5 estrellas Transformed my Sound
Revisado en Canadá el 29 de enero de 2021
Compra verificada
Have an 80's DUAL turntable and was using one of those 9 volt 'pre-amps' as my amp has no phone preamp. Sound was awful. Not enough power so only got sound out of 1 speaker and a little out of the other. Horrible.

Got the delivery... Packaged like it was an Apple product. Metal. Nice & Heavy. Feels rock solid. Looks great. Nothing cheap about it. Did the hookup and up powered the blue lighted tubes. Beautiful, just like the old day tube stuff. Moment of truth blew me away.

Rich sound, good highs and wider lows. I have won back my record collection. This is one of the best purchases I have made on Amazon in years. I upgraded the Tubes and noticed even more an improvement! Rock lives again and my wife hates me.
Leer más
A 16 personas les resultó útil
Informar de un abuso
Traducir opinión al idioma Español

Lukey
1.0 de 5 estrellas Maybe it was faulty but this sounded awful compared to my old 4 valve pre amp
Revisado en el Reino Unido el 29 de julio de 2021
Compra verificada
Normally i do not write poor reviews but this was a real disappointment. Yes it has valves and it is a short stage pre amp for £60+ but i got a terrible hum noise even when the earth was connected. Maybe this was a faulty unit? Now back to my old 4 valve pre stage amp with no hum and will spend some more cash on a better one. - Sorry! i know it was not the main amp or record deck as its been tested with other units that work perfectly.
Leer más
Informar de un abuso
Traducir opinión al idioma Español

Phil Roberts
5.0 de 5 estrellas Fantastic value for money.
Revisado en el Reino Unido el 20 de junio de 2021
Compra verificada
Having bought the Project evo turntable which requires a Pre amp & had a look at a few others decided on this one mainly because of the fact that it was a valve, anyone old enough to remember the 70s & 80s will remember valve amps. Three different dB settings from the well made box all require assembly, valves went straight in, with caution, easily set up & a great compliment to the turntable & speakers. Reviews I've read said the valves will get better with time, the sound is pretty fantastic straight out the box , looking forward to listening when this happens, we'll see. Overall a cracking product we'll made & value for money.
Leer más
Informar de un abuso
Traducir opinión al idioma Español